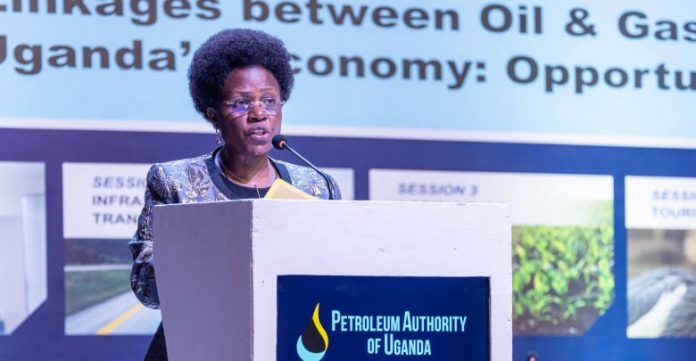 Energy and Mineral Development Minister, Ms Mary Gorreti Kitutu, has reiterated the need for Ugandan companies to be awarded contracts in the oil and gas sector prior to their foreign counterparts.

“Ugandan companies should be considered first in contract award in the oil and gas sector. They should come first in everything,” she said.

The minister disclosed that as per the National Development Plan III, the mineral and oil and gas sector has been prioritised among other sectors with the greatest multiplier effect on the economy along with tourism, agriculture, infrastructure and human capital development.

This year’s conference was organised under the theme: Linkages between oil and gas and other sectors of Uganda’s economy.”

Linkages under implementation include education and skills development, land use, security, transportation and infrastructure. Linkages under definition include agriculture, financing and fiscal system, tourism, health and housing. Linkages yet to be described are diplomacy and industry.

In the closing remarks read for him by the PAU Executive Director, Dr Ernest Rubondo, the Permanent Secretary in the Ministry of Energy and Mineral Development, Mr Robert Kasande, observed that although much has been undertaken by both the government and private sector, a lot more was needed.

The conference discussed various linkages between the oil and gas sector and seven sectors including infrastructure and transport, health, agriculture, tourism, financing and land use planning.

Kazi Njema Reporter - September 18, 2020
0
A combined team of investigators from the Chieftaincy of Military Intelligence (CMI) and the Albertine Regional Police Headquarters is investigating Kagadi police...

Back to his roots! Kabuleeta kicks off presidential bid in Hoima...