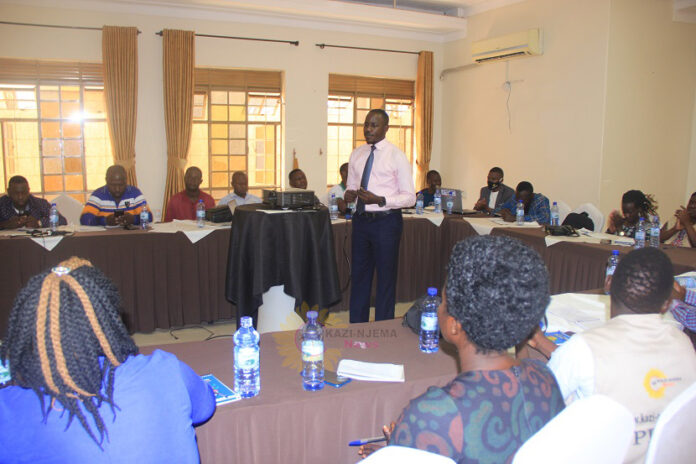 Civil Society Organisations (CSOs) have observed that women in the Albertine region do not speak out about the encumbrances they encounter in their daily lives amidst the development of oil and gas industry and environmental issues take shape.

The CSOs exemplify this in the marginalisation women faced in the compensation for the loss of family properties during the construction of oil roads among other infrastructures in which men subjugated them over finances.

During a capacity training on enhancement of gender responsive communication, the organisations also hinted on the challenges women face in the destruction of the environment as major sufferers yet they do not come out to echo out their stand against the degradation.

Mr Dickens Amanya, the Coordinator Bunyoro Albertine Petroleum Network on Environmental Conservation (BAPENECO), says to have the women’s voice heard, it is imperative for every stakeholder to engage in the cause in order to bridge the communication gap existent in both the petroleum value chain and the environment.

He says vulnerable voices have been left out or hardly heard by duty bearers or stakeholders; a matter that he says can be fixed by enhancing knowledge, capacity and skills of different media practitioners so they can in turn champion issues of gender in the entire range of developments that affect the hosts.

Mr Amanya is confident that with the media fraternity’s participation to lifting the voices of the vulnerable, there will be job creation, access to information, courage to speak out grievances and ultimately action taken for the betterment of the affected people in petroleum development and environmental conservation perspectives.

Mr Paul Mulindwa, the Executive Director of Kitara Civil Society Network (KCSON), regrets that there are many women who cannot fight for their rights in a male dominated society of deep rooted gender stereotypes.

He notes that the media is among the pivotal key players in lifting women voices to a higher level so that their grievances can be heard and resolved by the concerned authorities.

This was during a media training that attracted a cross section of media practitioners from all over Bunyoro region. The training was organised by BAPENECO and funded by World Wide Fund for Nature (WWF) in Hoima city.