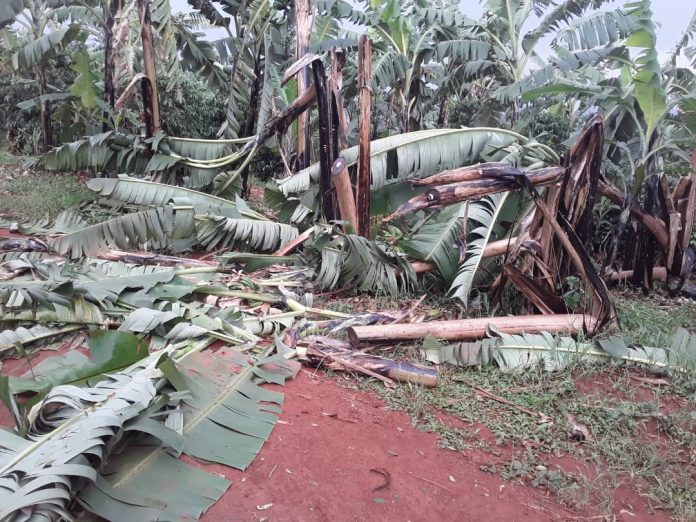 Residents of Mwitanzige Parish in Mwitangize Sub-county in Kakumiro District are in fear of being hit by famine after a windstorm battered their area last (Monday) evening.

The windstorm that hit five villages including Mwitanzige west, Karokarungi A, Kanyansi, Kitebe and Rwengeje left several acres of food crops destroyed and 30 buildings pulled down.

The Mwitanzige village chairman, Mr Sharif Kabagambe, told our stringer that such crop gardens as cassava, beans, coffee and maize and banana plantations were destroyed in the natural disaster that lasted for at least three hours.

Churches and schools were among other buildings that were razed to the ground.

The Mwitanzige Sub-county Chairman, Mr Frank Max Ompaire, said the affected residents are battling a double tragedy of lack of shelter as well as lack of food due to the windstorm.

To mitigate and avoid a repeat of the catastrophe, the chairman urged the residents to plant trees as windbreaks in the area.

October 28, 2020
Need Help? Chat with us
Start a Conversation
Hi! Click one of our member below to chat on WhatsApp
The team typically replies in a few minutes.
Kibego John
Kazi-Njema News