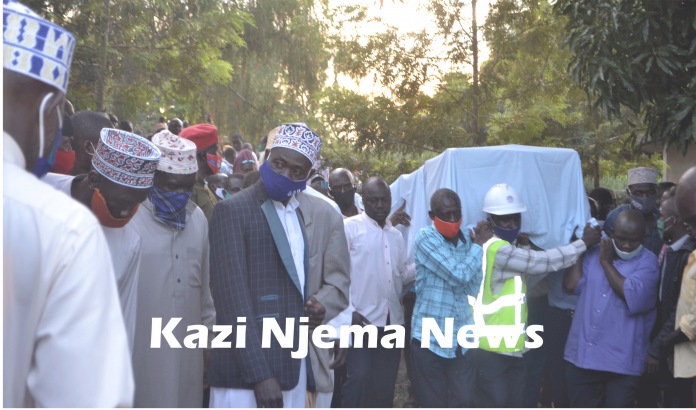 Hoima’s prominent businessman, Haji Abdul-Rashid Sewali will be remembered for his contribution to the development and stability of the Muslim community in Hoima district and the country at large.

It was remark made by most of the high profile, cultural, religious and government dignitaries that attended  his burial.

Haji Sewali passed on Sunday, December 27th, 2020 at around 9am. He was in the evening of the same day {yesterday} in respect of his request when he was still alive, consistent with the Islamic burial practice.

During this sorrowful ceremony that took place at his ancestral home in Kyabaheesi Cell, East Division, Hoima city, H.E The Mufti of Uganda Sheik Shaban Ramadhan Mubajje commended the deceased as a person who loved Islam.

“He used to call me asking about the relationship between the Muslim leaders at kibuli Mosque and those at Old Kampala. He closely followed up if the relationship was getting hostile,” said Mubajje.

The land is located not far from his home in kyabheesi and plans to start construction of the Campus is under way.

Dr. Irumba called upon all Muslims to emulate the late Haji Sewali to take Islam to a higher level in the region.

According to him, haji Sewali has been an exemplary investor in his home town.

“He has visible businesses in town that make our pride. We can talk of Hoima Coach Transport Company, Nsamo Hotel, and a Petrol Station.  He has actually inspired many people in business,” he said.

The outgoing Hoima city constituency Member of PA lament Hon. Dr. Lawrence Bategeka urged the public to learn from the late Haji Sewali to educate their children and promote peace amongst the children to avoid conflict after passing on.

Mr. Ali Babi a relative to the late described him as a mentor, exemplary, entrepreneur, father and a teacher.

Haji Sewali passed on at the age of 84 leaving two widows and 18 children.

They include Haji Abdul Sewali and Ahmad Bintu who were appointed heir.

He succumbed to cough and pneumonia that have disturbed him for long.

Haji Sewali has been in business for more than fifty years after retiring prematurely from public service in favour of self-employment. He served as an Information Officer for Bunyoro district, present day Bunyoro kingdom.

Haji Sewali wa a student of Makerere University where he wa sawareded a Diploma Journalism.