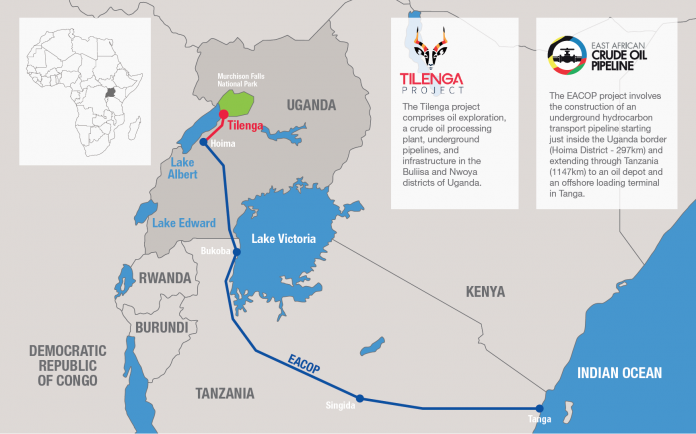 In its statement, Total says it aims to limit its Tilenga project’s footprint within Murchison Falls Park in line with the “Avoid – Reduce – Compensate” principles that underpin its Biodiversity Policy published in 2020.

Total said it is also committing to implement action plans designed to produce a net positive impact on biodiversity in the development of these projects. These plans will be defined in close cooperation with the authorities and stakeholders in charge of nature conservation in Uganda and Tanzania.

“We acknowledge that Tilenga and EACOP projects represent significant social and environmental stakes, which we are taking into consideration responsibly,” it says in the March 8, 2021 statement by Patrick Pouyanné, Chairman and Chief Executive Officer of Total, “We are mobilising substantial resources to ensure that these projects are carried out in an exemplary manner and create value for the people in both countries.

“In view of the questions raised by stakeholders, the commitment of Total is to answer to all questions and to ensure complete transparency on the studies conducted by Total and independent third parties and the actions taken as a result.”

Total’s Tilenga Oil Project is located in the conservancy Buliisa and Nwoya districts near the ecologically fragile Murchison Falls National Park and the Nile Delta in the Lake Albert region in western and northern Uganda respectively.

Total’s License Areas 1 and 2 are in Buliisa and Nwoya districts. They are operated by Total E &P Uganda B.V. The area is north of Lake Albert close to the Uganda-DR Congo border. It includes; six oil fields and is expected to have 400 wells which will be drilled in 31 locations. It will also host an industrial area, buried infield pipelines and supporting infrastructure, including camps.

The produced oil will be evacuated through buried pipelines to a treatment plant built in Kasenyi, for separation and treatment of the fluids (oil, water and gas). All of the water produced will be re-injected into the fields and gas will be used to produce the energy needed for the treatment process.

Total’s project also includes the construction of the East African Crude Oil Pipeline (EACOP) which consists of the construction of a buried 1,443km oil pipeline between the town of Kabaale in Hoima district, Uganda and the port of Tanga in Tanzania, and a storage terminal and loading jetty in Tanga.

The oil pipeline includes six pumping stations, powered by solar plants in Tanzania and a heat tracing system. The physical characteristics of the oil from Tilenga mean that it needs to be kept at a temperature of 50ᵒC for transportation.

However, both these projects are located in or traverse a particularly sensitive natural environment teeming with rare animal and plant life. One of the fields developed is located inside Murchison Falls Park while the others are located outside the park, south of the Victoria Nile.

Total, together with the government and Chinese oil company, CNOOC, is in the final stages of agreeing on how best to develop oil infrastructure under the Tilenga Project and the Kingfisher Project operated by CNOOC.

Some of the roads in Murchison Falls National Park are already being widened and conservationists say such activity might become an obstruction to animals like elephants.  Others say an increase in traffic in the park could potentially increase the number of wildlife fatalities.

However, Total says while its current permits cover nearly 10% of the park, the development will be restricted to an area representing less than 1% of its surface, and the undeveloped areas will be voluntarily relinquished without delay.

Total says its project has been designed to minimise the footprint of the temporary and permanent facilities, which will occupy less than 0.05% of the park’s area adding that it intends to support an increase by 50% in the number of rangers ensuring the preservation of Murchison Falls Park and will support a programme to reintroduce the rhinoceros in Uganda, in partnership with the Uganda Wildlife Authority (UWA).

Total is also working closely with experts from the International Union for Conservation of Nature (IUCN) to integrate the best practices for the protection of chimpanzees, particularly by promoting the conservation of forest habitats.

Total says it has taken several measures in Murchison Falls Park including;limiting the number of wells to only 10, constructing underground oil and water injection lines, no processing facilities, no flares and installing horizontally drilled flow lines to cross River Nile.

The company has also outlawed night work except for drilling while strict specifications to drilling equipment in order to limiting sound and visual impact will be applied.

Other measures instituted include; the removal of all waste for processing, traffic management plan to limit the number of vehicles and interference with tourist activities in the park. The route of the EACOP pipeline has also been designed to minimise its environmental impact.

For these two projects, and in line with its biodiversity commitments, Total will also implement action plans that generate a positive net impact on biodiversity. These plans will be defined in close collaboration with the authorities and stakeholders responsible for nature conservation in Uganda and Tanzania.

Total is also working closely with the International Union for Conservation of Nature (IUCN) experts to integrate the best practices for the protection of chimpanzees, particularly by promoting the conservation of forest habitats.

“Tilenga and the EACOP are a concrete example of the application of the Group’s ambition and commitments to biodiversity. Significant resources have been mobilised to implement them in an exemplary way,” said Nicolas Terraz, the vice president for Total E & P Africa.

“For four years, the affiliate has been in close contact with the local people and has been striving to minimise the project’s impact on the local community. We are proud to be a part of these major developments for the Group that promises to transform their host countries.”