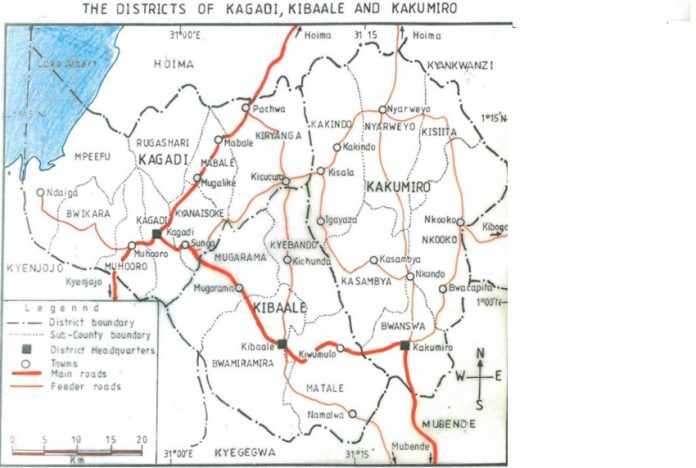 The Bunyoro-Kitara Kingdom Special Assistant on Cultural Affairs in the office of the Prime Minister, is concerned about some Banyoro in the formerly lost counties of Buyaga and Bugangaizi for their continued propensity to give their children Luganda names replacing those of their grandparents.

The lost counties are present day Kagadi, Kakumiro and Kibaale districts which were once Greater Kibaale District.

Hajj Burhan Kyakuhaire wonders that until now, many Banyoro obliviously implement the giving of Luganda names to their children basing on clans; a trend that was imposed by the British colonialists through their Baganda allies for a period of 60-70 years that followed the fall of Omukama Cwa Kabaleega.

Traditionally, Banyoro parents name their children basing on the prevailing circumstances under which a child is born other than on clans.

Mr Kyakuhaire observes that Runyoro/Rutooro language continues to vanish in the former lost counties because the older persons have taken limited efforts to guide the young generation against that unfortunate experience.

“Our culture started getting eroded due to a deliberate action taken by the British colonialists to give away Bunyoro counties including Buhekura and the recovered Bugangaizi and Buyaga to their Baganda associates as a reward for betraying their fellow Blacks in favour of Europeans,” he said.

According to Mr Kyakuhaire, owning a Runyoro/Rutooro language name was criminalised for a period of about 70 years until 1966.

It is against these injustices that Mr Kyakuhaire emphasises the need for Banyoro wherever they live to realise that their culture is continuing to vanish because of the deliberate negative propaganda and forces preceding the iron hand of colonialists.

He fears that once the cultural values are completely eroded, Banyoro will remain like a tree without roots.

An estimated 2.5 million Banyoro were brutally killed by the colonial invaders and their local supporters during the nine-year-protracted ‘Nyangire’ Rebellion staged by Omukama Cwa Kabaleega of Bunyoro Kitara Empire.

Women and girls were raped, millions of head of cattle and domestic birds were looted along with plundering of forestry resources. These are among the injustices committed during that unforgettable period of terror.

The kingdom claims to have substantial evidence to prove the massacres against Banyoro.

Uganda’s Constitution Chapter Four Article 31(1) as promulgated in 1995 under the ruling National Resistance Movement (NRM) calls for affirmative action in favour of groups marginalised on the basis of gender, age, disability or any other reason created by history, tradition or custom, for the purpose of redressing imbalances which exist against them.

Banyoro are victims of historical injustices and could have moved on well if something visible was done in implementation of this article in its 20 years of existence and 34 years of the NRM rule.