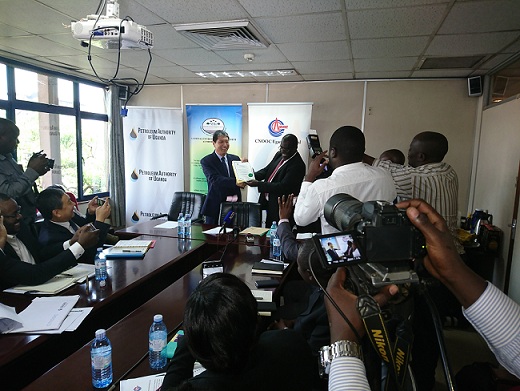 China National Offshore Oil Corporation (CNOOC) Uganda Ltd has been offered a certificate for the Environmental and Social Impact Assessment (ESIA) in regard to the development of the Kingfisher oil project in Kikuube and Hoima districts.

The certificate offered by the National Environmental Management Authority (NEMA) in Kampala indicates that the company is prepared to deal with both positive and negative impacts of their operations on the environment.

The certification now means construction of a 4.6km-feeder pipeline to the oil refinery in Kabale parish, Buseruka sub-county in Hoima district, a Central Processing Facility (CPF) where crude oil is separated from impurities, a lake water abstraction station and other facilities such as a materials yard and a camp.

CNOOC was licensed to take charge of all phases of development of Kingfisher oil field and commercial oil production.

At the ceremony, NEMA Executive Director, Dr Tom Okurut confirmed to Ugandans that the report was thoroughly reviewed with all concerns raised by Civil Society Organisations (CSOs), the public and government itself considered in the final report.

He described the report as a research-based one with a central objective of minimising the impact of the oil and gas developments socially, economically and environmentally.

By receiving the ESIA certificate for the Kingfisher oil project, CNOOC has passed one of the basic requirements of the International Organisation for Standardisation (ISO), ahead of the implementation of any project of the kind. The certificate will expire after 10 years from the date of issuance.

The President of CNOOC Uganda Limited, Mr Zhao Shunqiang, described the certification as an important stride towards the production of the oil deposits beneath Uganda’s Albertine Graben.

According to him, the certificate also concretises the relationship between the communities in the company’s area of operation and other stakeholders since the controversial concerns raised during public hearings have been addressed.

If the Final Investment Decision (FID) is made in relation to Uganda’s oil and gas industry today, CNOOC will be free to start establishing the infrastructure needed to see crude oil on the surface from the ground of its licensed area of operation.

France’s oil giant Total E&P Uganda, too, remains set after approving its ESIA for Tilenga Project early 2019 though it was first challenged by the CSOs over alleged imperfections without visible signs of success to have the certificate revoked so far.

The two are among the largest oil conglomerates globally.

FID is an agreement on capital investments on a long term project when money for the project is availed and execution commences.

To start oil production companies have to invest $10b (Shs36 trillion) of which $6.7b (about Shs24 trillion) is for developing Tilenga oil fields in Buliisa and Nwoya districts and Kingfisher and $3.55b (Shs13 trillion) is for the oil pipeline.

Communities feared that there would be degradation of Bugoma Central Forest Reserve, Lake Albert waters, River Kamansinigi and fishing activities and cultural sites among other sensitive physical features.

ESIA approval is vital because operations on the shared waters of Lake Albert can trigger a trans-border conflict and possible open war with the neighbouring Democratic Republic of Congo (DRC) if not carried out carefully.

There is also need to maintain people’s traditional sources of livelihood and also environmental degradation can frustrate global efforts to combat climate change and its horrendous effects.