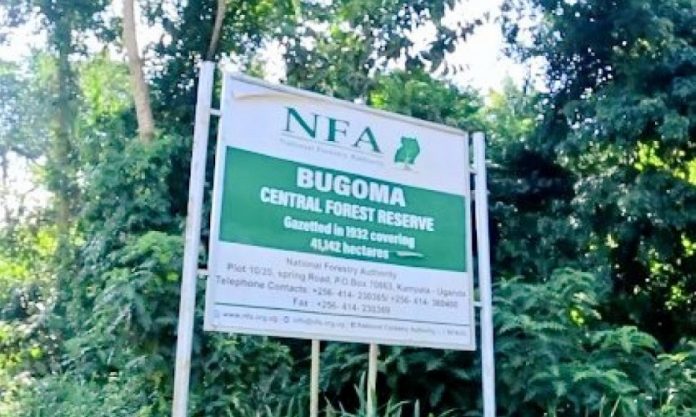 “Forests are sweeter than sugar. Trees are better than sugarcane. When the lungs of Bunyoro are destroyed, Bunyoro won’t be able to breathe. Hands off Bugoma forest!! “

Pressure is mounting against the government of Uganda and the National Environment Management Authority (NEMA) with online activists calling for the protection of Bugoma Forest against destruction by Hoima Sugar Limited in favour of sugarcane growing.

Started by Ms Mercy Chagara, a veterinarian, wildlife conservationist and environmentalist, a cumulative 1,890 activists had by publication time signed an online petition to the government of Uganda and NEMA as decision makers in the fate of Bugoma Forest.

Ms Chagara says that with the giveaway of the forest, the entire world will lose natural trees and wildlife essential for human health and income respectively.

“If the forest is cleared, we shall not only lose our wildlife to poaching but will lose our natural endemic trees too; some of which are endangered species. The forest brings a lot of income in form of tourism and provides food, water and medicine to communities around,” the petition reads.

Under the “Save Bugoma Central Forest Reserve in Uganda” campaign, the snowballing numeric power of environmental advocates such as Ateenyi Kyomuhendo, Amy Scott, Sam Mucunguzi, Sarah Nabudde, Ronda Green, James Kabuye, Graeme Crook and Timothy Bukenya among others contends that the destruction of Bugoma forest in favour of sugar is a wrong step taken.

“Forests are sweeter than sugar. Trees are better than sugarcane. We can import sugar but nature can’t be imported. Humanity really doesn’t need more sugar, and those seeking to make a profit from it should either grow it on already cleared land or seek some less destructive enterprise. Bugoma is irreplaceable,” the conservationists argue.

Adding: “When the lungs of Bunyoro are destroyed, Bunyoro won’t be able to breathe. Hands off!! We can’t put personal and individual interests above nature and majority interest. This forest is home to approximately 500 chimpanzees and is the vital link/corridor between Budongo forest to other forests in the north…clearing native forests for sugarcane is insane!”

The piling power pressure follows NEMA’s issuance of a certificate to Hoima Sugar Limited to use 22-square miles of Bugoma Central Forest. This has angered Ms Chagara and other environmental activists who contest the Authority’s scale of preference between human survival and sugar production.

“National Environment Management Authority has signed a licence that allows for the forest to be cleared and replaced with a sugar factory. This goes against its mandate of environmental protection and will result in poaching of wildlife in the forest and the loss of endemic species of trees and animals”.

The certificate issued on August 14, 2020, approves the Environmental and Social Impact Assessment (ESIA) conducted for a mixed use project.

The approval has sent chills down the conservationists’ spines now demanding for the revocation of the certificate.

The Bugoma Forest is a protected tropical forest southwest of Hoima City and northeast of Kyenjojo town, and east of Lake Albert, in Kikuube district of western Uganda. It was gazetted in 1932 and came under the mandate of the National Forestry Authority (NFA) in 2003. Its surface area is given as between 41,142 hectares (411.42 km2) and 65,000 hectares (650 km2).

Twenty-three species of mammal, 225 species of bird, and 260 species of tree are known to occur in the reserve. The forest is home to a considerable number of chimpanzees which started to undergo the habituation process in January 2016.

September 8, 2021
Need Help? Chat with us
Start a Conversation
Hi! Click one of our member below to chat on WhatsApp
The team typically replies in a few minutes.
Kibego John
Kazi-Njema News